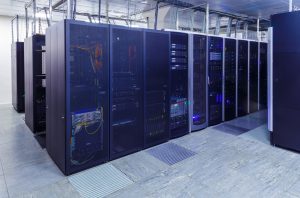 Uninterruptible Power Supply is used for uninterrupted supply of the loads. UPS-online type are used in server premises and Data Center and they can ensure continuity of power supply for sensitive IT equipment. Power Supplies of online type separate UPS input from its output, acting on the principle of double conversion – from AC to DC and later from DC to AC.

Power supplies are used for loads which we want to protect against power failure. Mainly these are computers, servers, telephone switchboards, control panels, pumps, air conditioners and many, many others.
If it is necessary to protect equipment against long-term power failure usually UPS with generator sets are connected in complex systems.

Power generators are devices that can be used as a primary or secondary source of electricity. It is a combination of a diesel engine (there are also petrol or gas engines) and asynchronous generator. Power generator is the primary system of reserve power supply, which does not allow for long-term power outages of main loads. They are effective and reliable source of energy.

Due to the fact that engine start lasts a minimum of several to tens of seconds of power outage they are usually used together with UPS.
Complete with generators are usually offered automation systems – Automatic Switching of Reserve (ASR), task of which is to detect failure of power line, start of power producing unit (generator) and after stabilizing its work automatically switches the receiver to generator. When city power is restored, the unit is automatically turned off and power supply from city line if switched on.

How can we help you?